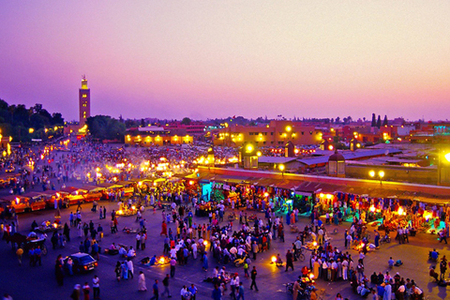 Marrakech, a former imperial city in western Morocco, is a major economic center and is home to mosques, palaces and gardens. The medina is a heavily filled and fortified medieval town dating back to the Berber Empire, with labyrinthine alleys where prosperous souks (markets) sell traditional textiles, pottery and jewelry. A symbol of the city, visible for miles, is the Moorish minaret of the 12th century Koutoubia Mosque. Food vendors line up with Djemaa el-Fna, a vast place where storytellers and musicians perform. The Marrakech Museum, in an old palace, exhibits Moroccan decorative objects, coins and contemporary art. Madrasa by Ben Youssef is an Islamic monument adorned with zellige tiles and carved cedar. Also notable are Bahia Palace, with its great ancient harem; the monumental ruins of the 16th-century El Badi Palace; and the royal mausoleum of the Saadian tombs. Outside the old town is the modern new town district, and notable gardens such as the Agdal, Majorelle and Menara

Average rating of car rental at Marrakech Airport according to our customers 4.8 (798 Ratings)